On October 13, 2019 the CinemAsians team received 4 awards for their short film ‘Betrapt’ at the 48 Hour Cinekid Festival.

The team was created as an iniative of CinemAsia FilmLAB’s Alumni program. The team participated in the 48 Hour Project of Cinekid Film Festival during the weekend of 11 to 13 of October. The team consisted of CinemAsia FilmlAB Alumni and people who have collaborated before on one or more CinemAsia (film)projects

Most crewmembers have an Asian background. This was also the case for a majority of the cast. The three 9 year old actrices were Ishani Markus (Javanese, Indian and Dutch roots), Disha Doekharan (Javanese, Guyanese and Indian roots) and Emma Simons (Turkish and Dutch roots). This project was their very first experience with film acting.

The initial outset for the composition of the team was accesibility. Both more experienced and less experienced crewmembers joined the film production. For instance a 15 year old crewmember thuroughly enjoyed working with adults and a (deafmute) crewmember learned how to clap while the team tried to communicate with handgestures. Sharing expertise and coaching were central during this weekend. Put a groups of creative forces together, all with their own expertise, and it created an energetic and great atmosphere that lead to a great final product. 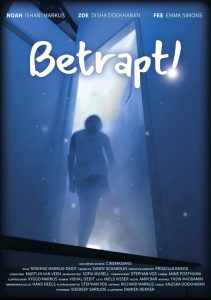 Climate Change
“Betrapt” is a short film with footing in reality. Climate change is something that this generation of children is actively discussing at school. The scene in the film where the young Zoë steals her sister Noah’s tooth to collect money to make some positive change is based on a true story. The fairytale narrative was artifully combined with vlog imagery and has a larger message: Be nice to each other. Positive behaviour will be rewarded.

Juryrreport
The jury members enjoyed the film. They gifted the film “Betrapt” the award for “Best Writing”:

“A funny and original story, the scenario was well constructed, the story was round. It’s a sweet and small story with a larger message. The jury is impressed with the nice combination of elements and the genre (fairytale/comedy) of the scenario. And all that in a mere 48 hours”

A special mention was given to Ishani Markus in the category ‘Best actress’. The jury really enjoyed her joyful and spontaneous vlogsfilms in the film. They jury even asked Ishani to please keep vlogging. One jurymember already pledged to follow her! And to cap it all of the films also won the award for ‘Best Poster’ and ‘Best Art Direction”

Roshnie Markus-Oedit was a participant of CinemAsia FilmLAB. In 2014 she wrote and directed the short film “Forbidden Love” and a year before she was production director of the short film “Bundah di Rumah” by Raoul Groothuizen. She also is active as a member of the CinemAsia Alumni Newsroom.  Would you also like to share an article? Then send a message to Daan Vree, FilmLAB Alumni Coördinator at daan@cinemasia.nl